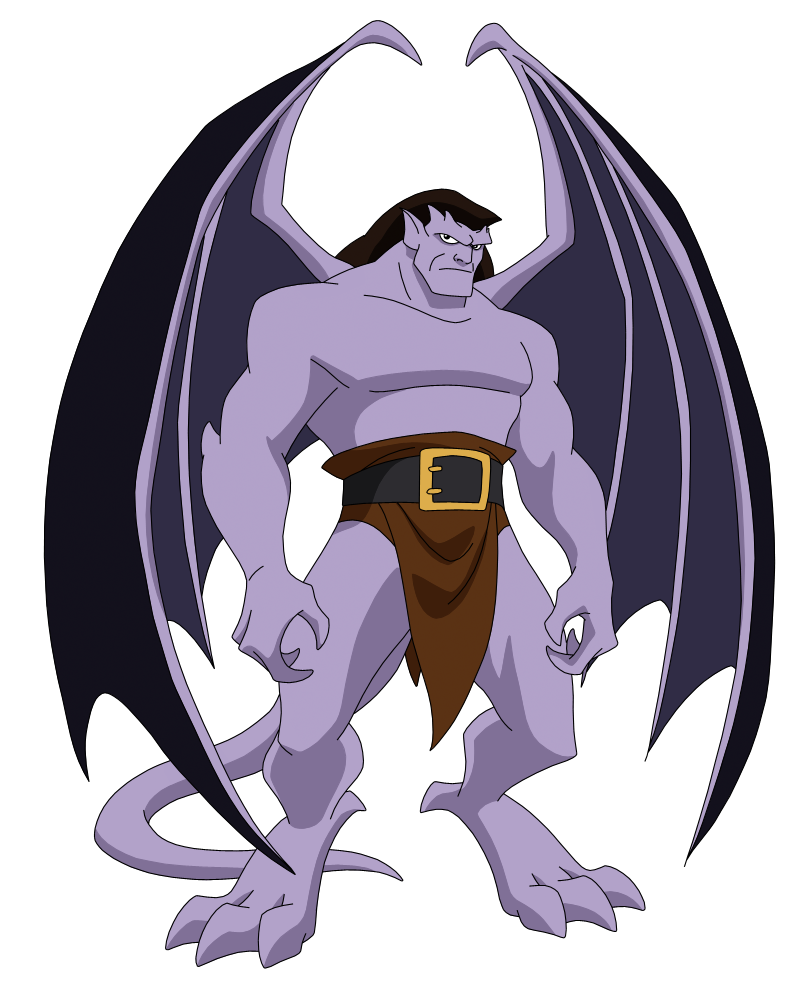 Appearances: every episode except for The Silver Falcon, Kingdom, & Pendragon

Bio: Goliath is the leader of the Manhattan gargoyle clan, a modern-day branch of the Wyvern clan from medieval Scotland. While his kind weren't in the habit of using names, he'd received his moniker from Prince Malcolm of Castle Wyvern, owing to the gargoyle's formidable size. In 994 AD, a Viking named Hakon had led an attack on the castle, an attack which had been thwarted by Goliath and his clan. However, Hakon and his men had later returned while Goliath and his then-nameless mentor had been away from the castle, and the other gargoyles had been encased in stone sleep, helpless to fight back. Goliath had returned to find the castle's human inhabitants had been taken captive, and most of his kind had been massacred, save for a trio of younger gargoyles and a gargoyle beast. Gathering the remnants of his clan, Goliath had sought out Hakon with vengeance in mind, only to discover that Hakon had been aided by the castle's Captain of the Guard, previously a human ally to Goliath's kind. The Captain's betrayal had been part of a plan to evict the humans and leave the castle to the gargoyles, but unfortunately, the Captain had been too cowardly to stop the massacre from happening. Before Goliath could enact revenge on either Hakon or the Captain, both humans had plunged from a cliff to their deaths below, nearly taking Princess Katherine with them. While Goliath had managed to save Katherine, her advisor, The Magus, had feared her dead and had lashed out at the remaining gargoyles, cursing them into a permanent stone sleep until such time that Castle Wyvern would rise above the clouds. Seeing the princess alive, however, The Magus immediately came to regret his rash decision, though was powerless to undo the curse. Distraught, Goliath had insisted that The Magus cast the curse on him as well, asking only that Katherine and The Magus look after some gargoyle eggs that were in the castle's rookery. One-thousand years later, in 1994, an American billionaire named David Xanatos had purchased the castle, having it transported brick by brick to the top of his new skyscraper in New York City. With the castle now above the clouds, the curse had been lifted, and Goliath and his clan had awakened to find the world was not as they had once known it. Xanatos had soon proven to be untrustworthy, and had also been revealed to be working with Goliath's former mate, previously thought to have died in the gargoyle massacre. Fortunately, though, the clan were able to find an ally in the modern world, a police detective named Elisa Maza. After the clan had acclimated themselves to their new surroundings, Goliath had turned their original purpose of defending their castle into protecting the island of Manhattan and its inhabitants. Then, in 1995, Goliath, Elisa, and the clan's dog-like garg-beast, Bronx, had been approached by an old knight calling himself Guardian Tom. He'd been just a boy when the massacre had occurred, but had helped Princess Katherine and The Magus get the gargoyle eggs to safety on Avalon, a magical island where time passes differently. Tom had claimed that the eggs were in danger, so Goliath had ventured to Avalon with Tom, Elisa, and Bronx, finding that the eggs had hatched ages ago and the next generation was already fully grown. He'd also found the island under siege by the Archmage, a foe from Goliath's time. After helping the younger generation defeat the Archmage, Goliath and company had set off for home, this time with a young gargoyle named Angela in tow. However, the magic of Avalon hadn't sent them to Manhattan straight away, but rather, on a journey around the world. It was during this world tour that Goliath had discovered that Angela was his biological daughter, breaking centuries of gargoyle tradition wherein younger gargoyles were to loook upon the whole clan as their parents. Eventually, Goliath and company had returned to Manhattan, just in time to save Xanatos's newborn son Alexander from being kidnapped by fae lord Oberon and his wife Titania.